On August 5, 2019, the Narendra Modi government effectively annulled Article 370 of the Constitution that conferred special status on Jammu and Kashmir (J&K) and divided the state into two Union territories, J&K and Ladakh. A year on, there is little convergence of views on the move. The Bharatiya Janata Party (BJP) continues to assert that the decision was in the interest of Kashmir and the nation at large. Mainstream political actors in Kashmir continue to oppose it. In an opinion piece published in the Indian Express, National Conference leader and former chief minister Omar Abdullah wrote that unless the central government restores statehood to J&K, he will not participate in elections.

In making this threat, Abdullah is raising a metric which has often been seen as the most important measure of democratic legitimacy– voter turnout in elections. This collapsed in the immediate aftermath of the militancy, took time to recover once elections were restored , but then resumed its downward trajectory after the BJP’s alliance with the People’s Democratic Party (PDP) ended in a fiasco. Because the erstwhile state of J&K also had parts of Jammu and Ladakh, which unlike the Kashmir valley do not have a Muslim-majority population, a geographical segregation is more useful to understand the valley’s political sentiment rather than headline voter turnout numbers for the entire erstwhile state. 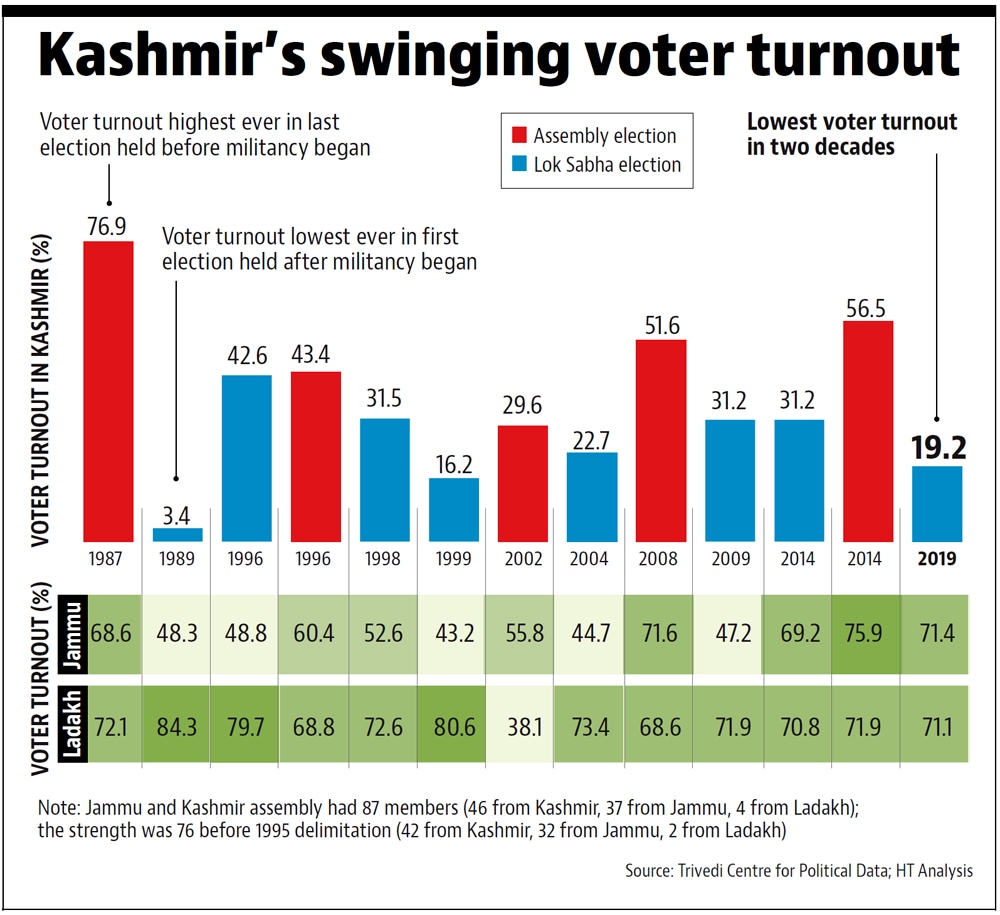 The legislative assembly of the erstwhile state of Jammu and Kashmir had 87 members, 46 from the Kashmir valley, 37 from the Jammu region and four from Ladakh. The assembly’s total strength was 76 before a delimitation exercise in 1995 (42 from Kashmir, 32 from Jammu and two from Ladakh).

In the 1987 assembly elections, held just before the militancy began, 73% of registered voters participated, the highest ever in any assembly or Lok Sabha election in Jammu and Kashmir. The voter turnout in 42 assembly constituencies of the Muslim-majority Kashmir valley was 77% compared to 69% in 32 constituencies of the Hindu-majority Jammu region. This was the last assembly or Lok Sabha election in which the valley saw a higher voter turnout than Jammu.

Alleged rigging of the 1987 assembly election is known to have ignited large-scale militancy in the Kashmir valley. Its impact on electoral politics was clear two years later when, in the Lok Sabha elections of 1989, only 25% of the electorate turned out to vote in the whole state. About 48% voted in the Jammu region, a 20 percentage point drop from the 1987 elections. In the Kashmir valley, just 3.4% voted, a 73 percentage point drop. In the Ladakh region, on the contrary, there was a 12 percentage point increase in voter turnout between these two rounds of elections.

Also read: From Kashmir to Ayodhya, the BJP’s total domination of politics

When Lok Sabha and assembly elections were held in the state after a gap of seven years in 1996, there was a significant improvement in the number of people turning out to vote, especially in the Kashmir valley. Nearly 43% people voted in the valley in both these elections, compared to just 3% in the 1989 polls. However, it took more than a decade before a majority of voters participated in polls in the Kashmir valley. It was only in the 2008 assembly election in which the Kashmir valley recorded a 52% voter turnout, while 72% voted in Jammu and 69% in Ladakh. To be sure, people’s participation in the polls did not significantly drop in Ladakh during the militancy, except in the 2002 assembly polls.

The highest voter turnout in Kashmir valley after militancy erupted was in the 2014 assembly elections. This was the same election which ended with a hung assembly and paved the way for a coalition government of the BJP and PDP, the last elected government in the state before it was turned into a Union territory. It was during the BJP-PDP government’s time that the valley erupted into prolonged turmoil after the killing of militant Burhan Wani in 2016.

The turnout in the 2019 Lok Sabha elections in the Kashmir valley dropped to 19%, the lowest in two decades and 12 percentage points less than in the 2014 Lok Sabha polls. To be sure, signs of growing disenchantment with the democratic process were visible earlier. Three years before the 2019 Lok Sabha polls, then chief minister Mehbooba Mufti won the by-election to the Anantnag assembly constituency. At 34%, the constituency recorded its lowest voter turnout in three elections. Also, only 7% voters participated in the by-election to the Srinagar Lok Sabha constituency in April 2017, its lowest ever voter turnout.

Among the numbers worth watching out for in the Kashmir valley, as far as the success or failure of nullification of Article 370 is concerned, will be the voter turnout whenever there is an election.