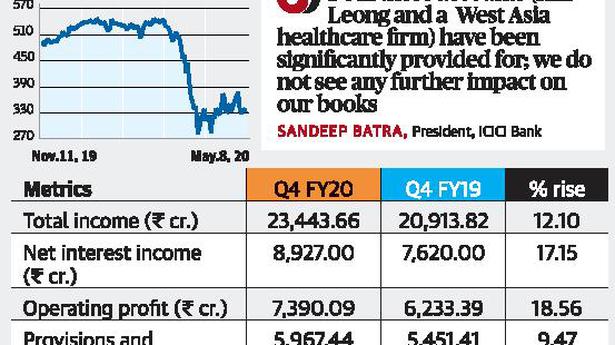 ICICI Bank reported a 26% growth in its net profit to ₹1,221 crore for the quarter ended March 31, 2020 (Q4), despite higher provisions made by the lender towards COVID-19 related issues.

The bank has made a provision of ₹3,242 crore in Q4, excluding COVID-19 related provision, which amounted to ₹2,725 crore. “This provision made by the bank is more than the requirement as per the Reserve Bank of India’s guideline dated April 17, 2020,” ICICI Bank said.

For the quarter, gross additions to non-performing assets were ₹5,306 crore while recoveries and upgrades, excluding write-offs, from non-performing loans were ₹1,883 crore. Slippages to NPA in the quarter included Singapore-based fraud-hit oil trader Hin Leong Trading and a healthcare firm in West Asia.

The lender reported 13% growth in domestic advances as on March 31, 2020 with retail loans rising 16% on year. Retail loans constituted 53.3% of the bank’s total loan book. Total deposits grew 18% and the average current and savings account (CASA) deposit ratio was 42.3% in Q4-2020 compared to 42.8% in Q3-2020 and 44.6% in Q4-2019. Total term deposits increased by 29% on year.Mr. Batra said about 97% of the branches were functional during the lockdown with reduced working hours. He also said about 30% of the loan book was under the repayment moratorium.

The bank has shifted its registered office from Vadodara, Gujarat to Mumbai, where its corporate office is located.

As a result, the annual general meeting of ICICI Bank can now take place in Mumbai.